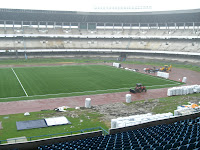 Last year the Government of West Bengal spend around Rs. 5 Crores (50 Million) on installing an artificial turf pitch at the Saltlake Stadium. Now the government wants to spend another Rs. 5,5 crores on the ageing stadium as was announced yesterday by the W.B. Sports Minister Kanti Ganguly.

The Government of West Bengal seems to be trying to utilise the hype surrounding the 2010 FIFA World Cup to strengthen its political base by tapping into the football fan base in the state. And the stadium revamp is one of those measures besides installing screens across the state for the rural population to be able to watch the FIFA World Cup. As long as something constructive is done for football it is something good.

The 120,000 capacity stadium desperately needs some renovation work to be done on it. After its opening in 1984 only make-up work has been done on the stadium's structure. Be it the galleries, toilets, changing rooms, etc all could do with some repairs and colour.

The galleries could do with proper seats in the few areas which actually have seats. Those old, blue bucket seats are either too dirty to sit on, are broken or have been ripped out. Toilets are a big issue at this ground. Many use walls or open drains to ease themselves as there are few public toilets and those few which are there are in a terrible condition. The changing rooms have received some make-up over the last few years, but still need to be much better and the shower facilities need a complete revamp.
While there is much more which needs attention around the ground like a fresh coat of paint hopefully the money is enough to do at least the necessary. Rs. 5,5 crores might sound a lot, but for such a massive stadium it might not be that much.
Diposting oleh Unknown di 11.35