Sunil Chhetri plays against Man U 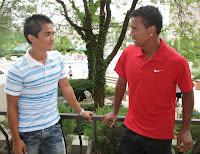 It was a big day yesterday for our very own Sunil Chhetri, then the boy from Delhi came on as a substitute for his American MLS club Kansas City Wizards in an international friendly against English Premier League giants Manchester United.

There was a lot of buzz back home in India before the game that India's Sunil Chhetri would be playing against the biggest football club (I don't agree on this, its surely a point of discussion) in the world. And many Indian football fans had hoped Sunil would start for KCW, but Sunil had to stay put on the bench and stay there for 69 minutes to see his side play an entertaining game against their superior opponents from the old world.

More than 52,000 people came to the Arrowhead Stadium, the biggest ever attendance for a football game in Kansas. And many were in for a surprise as the Wizards took a surprise 11th minute lead through their captain Davy Arnaud. The Wizards looked the more dangerous side, but defender Jimmy Conrad brought down Dimitar Berbatov in the box. The referee pointed to the dreaded spot, gave Conrad a red card and then Berbatov coolly slotted home the ball in the 41st minute. But only seconds later on the other side Kei Kamara would head in a Ryan Smith corner for the winner.

The Wizards came under more pressure in the second session with a man down and the game slowed down as numerous substitutions were made. And then came the 69th minute when Sunil Chhetri came on for Canadian striker Teal Bunbury. And to me it was clear that Sunil would have a tough job as KCW were playing in a 4-4-1 system with only one striker. But he made his runs, was there to play one-twos with team mates and took two long range shots. But both where too weak and from too far away to bother Ben Amos in the United goal. United build some pressure towards the end, but Kansas City prevailed to score a historic 2-1 win against a depleted Manchested United. It was good to see Sunil on fire, he showed the urge to prove himself, he wasn't overawed by the occasion; so hopefully coach Peter Vermes will now start to use him as a sub in the MLS.

Before the game Sunil had the pleasure of meeting Man U's Portuguese star Nani. Surely a weekend to remember for Sunil. Now I hope he will get some playing time for the Kansas City Wizards in the MLS as Sunil needs match practice before rejoining Team India later in the year ahead of the 2011 AFC Asian Cup.
Diposting oleh Unknown di 09.08