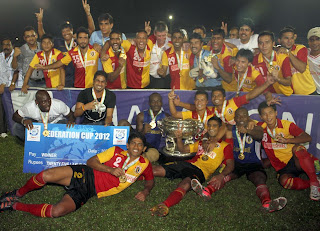 On the 56th birthday of their coach Trevor James Morgan the red-and-gold won their overall eighth Federation Cup title, their fourth title in only the last six edition of India's version of the FA Cup.

Infront of 35,000 spectators in a well filled Kanchenjunga Stadium, East Bengal had a home match and they dominated from the start but failed to convert the advantage into goals, while Dempo SC were more concerned of no conceding then scoring early on.

But it was the Goans who took a 50th minute lead through former India captain Climax Lawrence's half volley before East Bengal equalised through an Arnab Mondal header off a Mehtab Hossain free-kick on the hour mark. It stayed one-all until the end and this forced the match into extra-time where East Bengal produced their best attacking game to end Dempo's stiff resistance.

East Bengal pressed on the accelerator in extra-time introducing its super-sub Lalrindika Ralte, the hero against Churchill Brothers in the 91st minute. The young wing-half added pace to the team's attack and set off a through-pass for Penn Ikechukwu Orji, but the latter's hesitation inside the Dempo box spoiled the chance. Then Lalrindika fired a powerful grounder in the 99th minute that came off the Dempo goalkeeper Subhasish Roy Chowdhury and striker Manandeep Singh was there to tap-in the rebound to give East Bengal the lead.

Thereafter East Bengal tried to keep the pressure on Dempo and in the 109th minute Nigerian Chidi Edeh made it 3-1 from a solo effort after getting a long ball from Manandeep, but Dempo kept the match alive and reduced the margin off a header from Mahesh Gawli in the 113th minute but its search for the equaliser remained unrealised.

It ended 3-2 for East Bengal and the Federation Cup title was theirs.