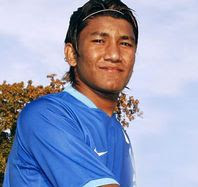 Team India and Mohun Bagan AC defender Nirmal Chettri has launched his own, personal website under www.nirmalchettri03.com with the latest news and updates about Nirmal available io his website, which will allow him to interact with his fans and followers.

"I still have a long way to go for club and country and I can't do it without the support of my fans. I try and stay in touch with them on the social media and now my website will help me more in that respect," said Nirmal after the launch.

After the humble beginnings in Sikkim, Nirmal Chettri showed glimpses of his talent at national level following his move to Air India and then a four-year spell at East Bengal saw him establish into one of India's best defenders. Besides the I-League, Nirmal won almost every trophy in Indian football with East Bengal and also played in the AFC Cup. Now at Mohun Bagan, he will be aiming to go one better. Despite his tender age, Nirmal is a gentleman off the pitch too, which is evident from his conduct on the social media. His gesture of holding camps for young footballers in his state of Sikkim shows that despite the fame and money he hasn't forgotten his roots.