The start of the 2010 FIFA World Cup has also meant lots of work for me, but it's work which I love and enjoy. I am not down in South Africa for the World Cup this time around, but am working back here in Germany for different media outlets to cover the World Cup atmosphere and fever. And after the opening 4-0 win against Australia that is certainly on the rise.

Before the 2010 FIFA World Cup I had talked with a number of TV channels in India about possibilities to work for them as either a commentator or an expert. In the end an interesting offer came in from English news channels Times Now to report about the World Cup atmosphere here in Germany.
Besides working for Times Now I am a telephone expert for ESPN India for the matches involving Germany and I continue to be the football expert for the Deutsche Welle's Bengali radio service and am analysing the World Cup matches for them.

For my TV reporting I first had to find a capable cameraman with enough experience and willing to run around finding the right stories. I have found it in local cameraman Frank Wappler, who normally does stuff about local happenings and sports event. The perfect partner for my personal World Cup journey.

I had to do some pre-planning, but the real work started on Friday to find out in my home town of Remscheid how the World Cup fever was catching up with the general public ahead of Germany's first match on Sunday. The public viewing open air arena in the heart of the city infront of the Town Hall was being made ready for the big day, but otherwise it was no real World Cup fever around, it was rather subdued. In the evening we went to a World Cup party where we did get some World Cup flair with people dressed in jersey's and people willing to talk about their expectations from the month long tournament.

So we had to return to the city centre on Saturday and that morning our local newspaper Remscheider General Anzeiger had published a headline story about myself reporting for an Indian channel, so quite a number of persons knew what we were doing. We found our local shopping mall the Allee Center done-up with flags, stores selling Germany merchandise and people talking about football. But none wanted to give me an interview, okay that isn't right people were willing to talk to me but not in English. Even old school friends seemed to be running away when they saw me. But in the end we got some nice footage, I did my intro and ending on the main square plus got some quotes. 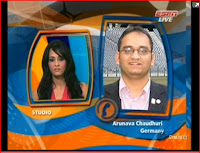 On match day it started early for me with a telephone interview for ESPN India to give them the latest from Germany. Thereafter it was watching Algeria vs Slovenia before I went for the first time to the public viewing arena to do a recording for Times Now outside the venue as the fans were going in. Thereafter I drove home to quickly upload the recording and catch a glimpse of the Serbia vs Ghana game. After the game finished I wrote a quick report and back to the public viewing arena. The live act of the day was on stage DJ Oetzi and I wanted to interview him afterwards, so went backstage and waited for him. Sadly he didn't want to do the interview in English, so had to do an interview again in German. After this was done went outside again to get some reaction from fans and then it was time for the Germany vs Australia. And what a great experience it would be with 5,000 people on the square watching the match on the giant screen. It surely did help that Germany won 4-0 against the Aussies and what happened afterwards is something I hadn't seen in Remscheid. Celebrations as if Germany had actually already won the World Cup. People celebrating everywhere, we got some really great footage that night. In the end I did an interview with two Indians friends, who had come over to experience public viewing in Germany. We already had enough footage, but did try some of the pubs around to get some more reactions, but the people were all on the streets and difficult to interview with all the sound around.

After all this went home and the day wasn't over yet. Just minutes after walking in my colleague from the Deutsche Welle Bengali service called asking for an analysis of the day, especially of the Germany vs Australia game. We did it and it is easier after such a win, then after boring games were you don't really have much to say. The analysis done, now it was time to write. It took me about 45 minutes to get through this, it was already past one before I sat down to write things for my blog. And by two I was finally done and went to bed knowing that a good day's work was behind me.

And on Monday morning I got to see that one of my blog entries had been published by the Deccan Chronicle through my friends at sportskeeda.com, who publish my blog entries.
I hope the rest of the World Cup will be as fun as the first weekend...
Diposting oleh Unknown di 02.45