EA Sports - FIFA2011: The new BE A GOALKEEPER function 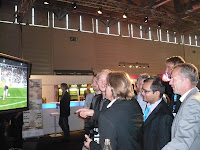 The Gamescom (Games Convention) opened its doors today at the Köln Messe (Cologne Tradefair) and day one traditionally is not open to the general public, but rather only for an expert/technical audience.

I had the pleasure of being invited and once more I was had a link with international goalkeeping. Learning more and more about goalkeeping. The invitation had come from EA Sports through the SSC Sports & Sales Consulting agency. Thanks guys!

The topic of the meet the press at the EA Sports bar in Hall 6 was the launch of a new feature in their FIFA 2011 game and the new feature is called BE A GOALKEEPER as so far goalkeeping wasn't one of the priorities within the game and also for its developers. Actually often the standard of goalkeepers has been weak even to the extend of being pathetic, which allowed the attacking players to score at will. Now that gap in the game has been closed and also one can play in an option in which one only plays the goalkeeper and the rest of the team is controlled by the computer. The functionality of the goalkeeper has also been strengthened in general too. 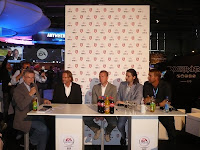 The discussion had German national goalkeeping coach Andreas Koepke; former Swiss international keeper Joerg Stiel; Lutz Pfannenstiel, the German keeper who as the only player has played professional in all six FIFA confederations; and Lars Leese, a German keeper who played for FC Barnsley in England. The panel was moderated by legendary German radio commentator Manfred 'Manni' Breuckmann, whose commentary runs through the game in the German version.

The questions and discussions centred around the background of the four keepers, modern day goalkeeping and the game FIFA2011 trial version which the keepers could test before the panel. And one could see the differences on the virtual playing field. Lutz Pfannenstiel has played a little more then the rest, Koepke and Leese had experiences playing against their young sons, while Stiel had no such experience as he has two daughters.

The new FIFA2011, the 11th game in the series by EA Sports, will be launched worldwide at the end of September 2010. And gamers around the world are said to be waiting for the latest version with not only a new feature in being a goalkeeper available, but also many other technical advance- and enhancements.