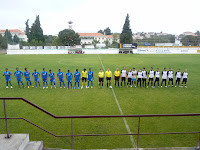 The Indian national football teams Portugal training camp is on for less then two more weeks and then the two month's in southern Europe will come to an end and the team will return to India for a period of international friendlies in September and October. But there are confirmed matches and those about which speculations are making the rounds. Lets try and gather those infos.

The series of friendlies start with a match against Thailand in Bangkok on September 4 and a return game in Delhi on September 8 against the same opponent from Southeast Asia. The Ambedkar Stadium in New Delhi would host the match and the venue is set to host four/five more matches over the month of September.

Three more games are said to be confirmed. The highlight could be a match against 2010 FIFA World Cup travelled North Korea on September 14, but different sources say different things around the game as a lot depends on the political leadership allowing the team to travel to India after it termed them disaster in South Africa with the defeats against Brazil, Portugal and Ivory Coast. The coach and players are said to have been punished and gone through an investigation on why they failed in the World Cup. It would be interesting to see them come and play in Delhi with a team which could be totally different from the World Cup squad. with North Korea you never know.

Also stated as confirmed are two matches against Turkmenistan on September 22 and 25, but infos from Portugal say that Bob Houghton isn't to keen to play the central Asians as India's opponents are Australia (originally Oceania), South Korea (East Asia) and Bahrain (from the Gulf). So playing them at the moment doesn't make any sense as per the coaches thinking.

And then there is the interesting rumour that has now also hit the papers that India could play an African side on September 18. The candidates happen to be Namibia and Gambia, ranked 115th and 103rd in the latest FIFA world rankings. And I used my African contacts to find out if there is any truth in this story. Interestingly in Namibia no one is aware of any such match and September 18 not being an official FIFA match date means that both these countries would come without their foreign, mainly Europe based players. But still if such a friendly would happen it would be a good test for India against an unknown opponent and a style uncommon for our boys. And likewise Bob isn't too keen on such a match.

And the series of friendlies is set to continue in October, but the opponents are not known yet. And with the Commonwealth Games happening in New Delhi the Ambedkar Stadium is out of reach in the first half of the month. This could give Pune the chance to host international friendlies for the first time.
Diposting oleh Unknown di 02.30