The 67th edition of the National Football Championship for the Santosh Trophy now have an own tournament logo and a mascot in Kichu, a puppy chasing a football. Both where launched yesterday in Kochi, Kerala. This years tournament will be played from February 1 to March 3 in Kerala and Uttar Pradesh.

The two winners of the logo and mascot got Rupees 5,000 each as cash price for their designs.


Here a photo of the mascot 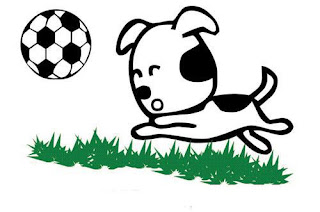