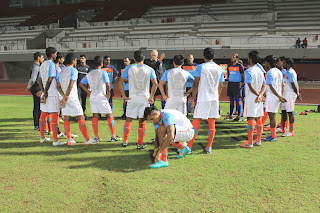 Team India coach Wim Koevermans has named his 23 players squad for the international friendly against Palestine on Wednesday, February 6 to be played at the Nehru Stadium in Kochi.

Koevermans, under whom India had won the 2012 Nehru Cup, maintained it's a very important match for India. "We need to assess ourselves. We need more such matches," Wim told Aiff Media.

Captain Sunil Chhetri, who plays for Sporting Clube de Portugal 'B', added, "Unless you play International Friendlies you cannot gauge where you stand. We stay grateful to AIFF for arranging the match."

"The passion for the sport in the Kerala stays unparallel and we expect a full house cheering for us against Palestine," Sunil further stated.

Koevermans has been travelling across India to watch as many I-League matches as possible to name his squad for the friendly. Interestingly seasoned Sandip Nandy makes a comeback in the squad as does Lalkamal Bhowmick, while 'Player of Indian origin' Izumi Arata gets his first call-up as does winger C.K. Vineeth.

Meanwhile Koevermans has named 14 stand-byes in-case any of his 20 players called-up get injured and can be replaced ahead of the friendly.

The squad will assemble in Kochi on Sunday, February 3 ahead of the match after their I-League engagements.