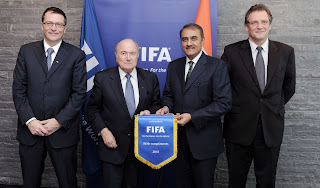 The president of the All India Football Federation Praful Patel has travelled to Zurich and today met with FIFA President Joseph Blatter, FIFA Secretary General Jerome Valcke and Thierry Regenass, FIFA Director Member Associations and Development Vision, at FIFA Headquarters to dicsuss the issues relating to the guarantees from the Government of India required by FIFA regarding the hosting of the 2017 FIFA Under-17 World Cup.

Praful Patel explained to Sepp Blatter and Mr. Valcke that all the requirements mentioned in the guarantees are fulfilled by the existing legislations of the country and the Government of India had already sent a letter to FIFA explaining the same and giving its unequivocal support for hosting the 2017 FIFA Under-17 World Cup.

As per the AIFF the meeting was very positive and FIFA agreed to review the letter of the Government of India and the legal opinion with their legal department and requested the AIFF to send their legal advisors for a meeting with FIFA so that the matter can be explained to them in greater detail.