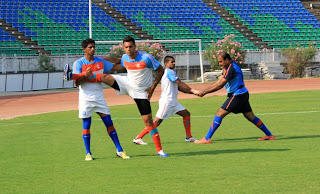 All the remaining players of the Indian senior national team have joined the rest of the squad in Yangon, Myanmar. While the Churchill Brothers players landed in Yangon late on Wednesday evening, the East Bengal players joined the squad earlier today.

While the four Churchill Brothers players – Sunil Chhetri, Sandip Nandy, Lenny Rodrigues and Denzil Franco arrived directly from Hong Kong, the three East Bengal players – Raju Gaikwad, Mehtab Hossain and Robin Singh arrived from Kolkata via Singapore. All the seven were away for their respective club commitments in the AFC Cup.

"It's nice to have them back," said national coach Wim Koevermans. "They need sufficient rest and at the same time need to acclimatise to the new time zone and recover fast," he added.

2I got to play two matches and even scored two goals. That makes me more confident. Playing full 90 minutes in two consecutive matches that too one in the AFC Cup has added to my morale" he maintained. "This is a very important tournament for us and we can’t rest back and relax."

Mehtab Hossain, the East Bengal midfielder quipped that it "feels nice to have come back from winning an AFC Cup match".

"After a victory in our first match in the AFC Cup, we head into the AFC Challenge Cup with a lot more confidence. We are fit and raring to go," he informed.

Denzil Franco, sitting next added, "It obviously feels nice to be back in the National squad. We will give our best in the forthcoming Tournament."

All the seven players were part of a limbering session at the Yangon Training Centre, the match venue, even as the rest sweated it all over on the field.

"These seven players add to our strength. We don't have much time prior to our first match against Chinese Taipei. We needed them back badly for the sessions," he pronounced.

"The National Team has always been a special place for me. It's nice to be back again. This is an important tournament in my career," East Bengal striker Robin Singh said.

India play their first match against Chinese Taipei on March 2 at the Yangon Training Centre.