Lalkamal Bhowmick: This team isn't about a specific set of players 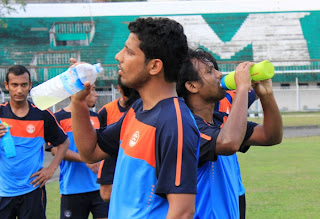 "Go Lalkamal go", instructs Wim Koevermans and the pace increases. His hair fluttering, the Prayag United midfielder stays omnipresent in the practice sessions. Later, in an interview to AIFF Media, Lalkamal Bhowmick spoke at length about his views on the 'much more pan-Indian squad', changes brought in by Wim Koevermans, learning to be patient and much more.


What is it like to be a part of the National squad?

It's a sense of pride as much it is an assurance that you have been awarded for your perseverance. It's also a part of your confidence building especially in a country like India. When I sit back and think about it, it gives me goose bumps. We are a vast country but now I'm among the best 23 in the country! I'm better than my neighbour; I'm better than, perhaps my best friend; I'm better than most. It's a feeling which can't be shared but felt.


Is it frustrating to sit out and wait for your debut?

Not at all! I've just broken into the squad and I know I will have to wait. I also know that sooner or later, my chance will come. There's a reason as to why I am in the squad of 23; at the same time, one needs to understand as to why I'm not yet made my debut. The Coach has certain plans for me as he has for everyone. My job is to improve as a player with his inputs and prepare myself for the moment. Life is all about a learning curve. You need to learn to be patient.


Did you find adjusting a bit tough in the National squad?

Not really! My role in my club stays the same as it is under Wim Koevermans. We play the same system. Adjustment hasn't been a problem at all. Instead, I felt much more comfortable from my first day. And as for my teammates, I know all of them as much they know me. It's not an alien land at all.


How much did the camp in Pune help?

It was very good. We have planned a lot for the AFC Challenge Cup. The Camp has helped to build up the sense of belonging and oneness among all. The team spirit is excellent. Besides, the Coach stressed on high intensity practice sessions which were backed by video analysis. It was fun and work at the same time.


How much has the National Team changed over the years?

I have noticed two distinct changes. The long-ball play has been shelved and there's a lot much emphasis on possession football. Today, it's also not all about the ball; rather, it's a whole lot about how and what you do to get it back when you don't have possession. Nowadays, we play modern football.

Not long back, there was a perception that you need to represent a Big Team to play in the National team. But today if you look around, you notice players from Pailan Arrows, United Sikkim Football Club sweating it out in the Camp with the others. If you go through the squad, you'll find four players from Prayag United in the squad. That was something unheard of in Indian football not long back. There is a pan-Indian presence.