India Coach Wim Koevermans: We are here to win! 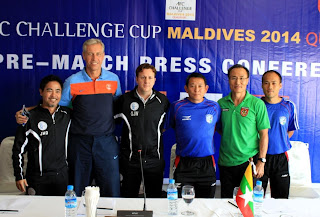 Indian National Coach Wim Koevermans said India are here to "win the Tournament" to make his intentions clear at the qualifiers for the 2014 AFC Challenge Cup. Koevermans said this at the Official Pre-Tournament Press Conference in Yangon today.

"We aim to win every match which we play and that's no different for the AFC Challenge Cup," Koevermans said. "We have had a good Preparatory Camp for the Tournament in Pune. We landed early in Yangon to acclimatise to the conditions and the boys have responded well," he added.

"There are a lot of young players in India who have the capability to play at the highest level. This is a test for them as much it's a chance for me to assess their performance and how they react."

"Indians are very proud when it comes to the National Team. We are expected to win every match. We have a huge responsibility," he pronounced.

If the Indians have had a preparatory camp for two weeks, then their rivals in the tournament opener, Chinese Taipei head in the competition after a '40-day Camp'.

Koevermans' rival counterpart, Chinese Taipei coach Chen Kuel Jen meanwhile siad, "We have had a Preparatory Camp for 40 days and we are satisfied with the sessions. All the teams are equally strong in the Tournament. We have also spent time to learn about each of them."

"We play to a different style nowadays," Jen continued. "There are a whole lot of new players from the lot which played in the EAFF Championship in December 2012," he added. "We will try our best to qualify."

"This will be a tough competition for sure. There’s isn’t much difference between the sides. All the teams are equally strong and have a chance for qualifying for the final phase of the AFC Challenge Cup in Maldives in 2014."

"It doesn't necessarily mean that Myanmar will be through just by virtue of being the hosts," he went on.

For the record, the Group-toppers get a direct entry into the final phase while the two best runners-up amongst the five groups also get a place in the final round next year.

Guam Coach Gary White said, "We have studied a lot about all our opponents. History may not be on our side but we have prepared well this time around," he warned.