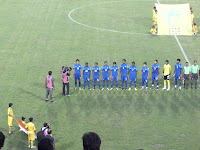 I was not aware of our latest rankings on Wednesday afternoon before our match against Namibia when I was told that we had crashed down 22 places to be now ranked 160th in the world. I was shocked and couldn't believe it at first, but when I mentally went through our records of the last few years and the fact that we had not played any official international friendly from August 31, 2009 to September 4, 2010 then it was clear to me that this was something which had been coming for sometime.

But the ranking sadly does not show the real strength of Team India and of many other nations in the FIFA world rankings. Just take the example of India beating Namibia on Wednesday night, who are ranked 116th as per the latest release. So we are able to beat a nation which is ranked 44 places above us, a surprise or does it show our real potential? I would go with the second idea as I personally feel that the current Team India could be in the 120s of the FIFA world rankings and not a lowly 160.

The reason for such a low ranking is simply not enough international matches over a calendar year. We lost 47 points over the last month, which meant the 22 place drop in global rankings and a drop of 10 places to 33rd in Asia. Our opponents in the 2011 Asian Cup are in a different league altogether. Australia remains number one, South Korea number three and Bahrain dropped a spot to no. 6 in Asia. But what worries me more is that we are now way down the pegging order and this could harm us in the qualifiers for the 2014 FIFA World Cup which will start sometime next year. This means we would have to go through two rounds of qualifiers for qualifying for the group stage of Asian qualifiers and due to our low rankings we could face tougher opponents.

Post the Namibia match I had the chance to speak to our national coach Bob Houghton and Bobby said one thing to me. "Son, don't look at the rankings as such. We need more matches and only then can be rectify our rankings." Surely to the point and hopefully the AIFF will organise eight to 10 full 'A' internationals ahead of the Asian Cup in January. And with the right results we could at least get our rankings back into the 140s ahead of the Asian Cup.

To be honest it looks odd to see ourselves behind Maldives, Bangladesh, Sri Lanka and Nepal in the rankings plus only two places ahead of Pakistan. And I remember only last December our Under-23 team beat some of these sides to win the "South Asian Football Federation" Championships in Dhaka, Bangladesh. But that win does not feature in the rankings as we decided to play the tournament with our juniors, which was great exposure for them but harmed our rankings.

The AIFF needs to stay aware of short term goals and long term development. Both need to go hand in hand, only then can we develop.
Diposting oleh Unknown di 08.13