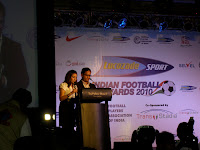 The second annual "Lucozade Sports" Football Players Association of India awards were held at the Taj Palace, New Delhi last night. I had the pleasure of hosting it along with Ayesha Sindhu infront of a full house. And it was impressive to see the media covering the event in such a big way with some channels even showed the event live.

The evening started with a special welcome to the dignitaries, then Ayesha and I had a chit-chat with the FPAI president Baichung Bhutia about the work FPAI has been doing over the last few years since its inception in 2006. It was about what FPAI does for youngsters, the current professionals and ex-players. Baichung also explained that about 90% of the players had taken part in this years voting, a considerable increase with last year only Team India and the Under-23 boys taking part in the exercise.

Then came the first highlights of the evening, the felicitation of special achievements in the past year. Striker Sunil Chhetri got one for making the move across to the US to sign for MLS side Kansas City Wizards, defender Deepak Kumar Mondal for being the first footballer in eight years to get an Arjuna Award, while the third and final felicitation went to Baichung Bhutia for playing more then 100 matches for Team India.

But the evening was not only about felicitations and awards but also performances. Sadly this year the players didn't prepare any show acts like last year in Kolkata, but still there were some enthralling performances. The first one came from the Street Kings of India, four boys who are India's first professional freestylers. Thereafter the first award of the evening, "Young Player of the Year", was presented to Dempo's Joaquim Abranches by national coach Bob Houghton and Udit Sheth (MD/CEO of TransStadia). The second award was the "Fan Player of the Year" award for which the fans could vote online on the FPAI website and choose amongst five candidates. The award went to our international goalkeeper Subrata Pal, who received the awards from Sports Minister M.S. Gill and Subhojit Sen (GSK India). The third award was the "Coach of the Year" and the winner Armando Colaco, Dempo's successful coach, received it from AFC president Mohammed bin Hamman and FIFpro Asia chairman Brendan Schwab.

Thereafter it was another break and the duo of Sandeep and Sanjeev Vyas pelted out of Desi and international numbers which really got the crowd going. We were three awards down and three more to go. The next award was handed over by the Meghalaya Chief Minister Dr. Mukul M. Sangma along with actor Rahul Bose. It was the "Foreign Player of the Year" award which once more went to Churchill Brothers' Nigerian sharp shooter Odafe Onyeka Okolie. Then came the newly constituted "Fittest Player of the Year" award which winger Anthony Pereira received from actress Nandana Sen and Subhojit Sen (GSK India). The last and final award of the night was the "Indian Player of the Year" which talented striker Mohammed Rafi received from AIFF president Praful Patel and Bollywood star John Abraham.

Thereafter Joy Bhattacharjya thanked everyone involved and the finale saw the winners and film stars return on stage with Sandeep and Sanjeev Vyas singing a couple of songs before the photographers had a chance to do a group photo with everyone still on stage. This marked the end of the official proceedings. Thereafter was the official dinner and the after party for invited guests, while some of us had to rush across next door for the official press conference. First I had to conduct one with Baichung Bhutia and the film stars John Abraham, Rahul Bose and Nandana Sen; while thereafter it was with all the winners.

I would like to congratulate Baichung, Jahan, Debanjan, Joy and all others involved with the FPAI Awards for a grand evening! You have set a high benchmark for next year. Thanks Bhai & Jahan for allowing me to be a part of it.
And it was great fun working with you Ayesha!