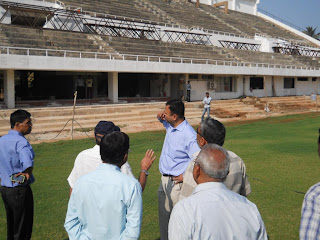 The I-League CEO Sunando Dhar yesterday was in Goa to inspect the ongoing renovation work at the Tilak Maidan in Vasco. Since the Duler ground in Mapusa does not have the infrastructure to support live broadcast facilities, it was imperative for the I-League official to suggest ideas to the broadcasters who are missing high profile matches due to unavailability of suitable stadiums in Goa.

Sunando Dhar was optimistic that the renovation work would be completed soon and the stadium would host some of the remaining I-league matches this season.

The Nehru Stadium at Margao, along with Tilak Maidan are being renovated to host the 3rd Lusofonia Games later this year. Due to the excavation work at both these venues, the current I-League matches were shifted to Duler Ground in Mapusa.

Sunando Dhar was in the state to review the progress at the stadiums and to explore the possibility of live telecast of I-League matches which are currently being played by the four Goan teams.

A meeting of the four I-League club representatives was then held along with the Goa Football Association president Shrinivas V. Dempo, SAG Executive Director Elvis Gomes and GFA member Anthony Pango at the Dempo House in Panaji. Officials from the SAG expressed confidence that the I-League matches would kick start by March 20 at the fully equipped venue at Tilak Maidan, Vasco. Mr. Dhar also proposed to send a team of technical consultants from the broadcaster to give suggestions on appropriate locations for placing of the TV cameras.

In the end it was decided by the clubs to send a review report to the AIFF by mid-February.
Diposting oleh Unknown di 00.00