End of the road for Lalam Puia? 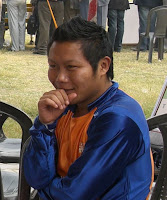 The 21 year old Pachau Lalam Puia from Mizoram was fired yesterday by his Kolkata club Chirag United SC on disciplinary grounds. And it could be the sad end of a career which never really took off due to Puia's off field antics. Puia was a few years ago seen as one of the biggest young Indian talents, especially when he was at the Tata Football Academy, but he only showed glimpses of his talent once at the senior level and never could he made the breakthrough that was expected from him. He first joined Mohun Bagan where he never got past Jose Ramirez Barreto and Baichung Bhutia, and then last season at Chirag United were he was also down the pecking order.

And why? Simply put Puia has been having a drinking problem for years. Due to that he has been arrested, has picked up fights, has been send to a rehab centre; but it all seems to have failed on him. Puia has not realised that he couldn't go on like this and also that he is wasting his talent. I remember we had spoken a few times over the last few years about this and he would always say to me, "Dada I will change," but that hasn't happened so far. I hope this is a final wake-up call to Puia and he gets his career back on track.

Going down memory lane I remember the first time I met Puia and saw him in action. That was in the summer of 2004 here in Germany when the Tata Football Academy came to Schoenau (southwest Germany, close to Heidelberg) for a month long training camp. I saw him in action as a 15 year old against a local under-16 side and though Puia was a head shorter then the German defenders with his sheer speed and toughness, not often seen in Indian players, he was able to beat his opponents, which caught not only my eye but also those of Germans present that day.

Over that weekend I would not only would talk to coach Ranjan Chowdhury and the TFA staff present, but also the players amongst them Puia. Puia told me about his ambition was to play abroad, ideally in Europe and become a great striker. Puia still talks to me when we meet about that dream, but he sadly isn't putting in the effort needed to get there. As said, I hope it is a wake-up call for him and he realises that he needs to change.
Diposting oleh Unknown di 09.06