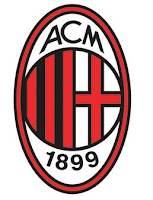 It was the move of the last transfer day, Brazilian Robinho has signed a four year contract with Italian giants AC Milan ending his two year misunderstanding with English Premier League side Manchester City. And this transfer marks the second anniversary of Robinho joining Manchester City in 2008 as the first signing under new owners Sheikh Mansour bin Zayed al Nahyan from the Abu Dhabi royal family on the last date of the summer transfers. The transfer was a British record at 32,5 Million Pounds which the club spend on the player and one remembers interviews where Robinho wasn't sure which English club he had signed for as before the deal had come about he had been in long negotiations with FC Chelsea.

Robinho never really felt at home in northern England. He did score 14 goals in 41 appearances, but Robinho had spend the first six months of this year on loan with his former club Santos FC as manager Roberto Mancini had no use for him. Robinho wanted to stay back with Santos, but the Brazilians were not in the financial situation to secure a long term deal. Manchester City meanwhile did not want to take the Brazilian back though he still had a valid multi-year contract and that due to the fact that coach Mancini still didn't want him while he was bringing in other players.

The transfer market has been sluggish this summer, but there had been numerous rumours surrounding were Robinho could play the new season. He wanted to return to Santos, while Manchester City were looking to recoup at least some of the transfer fee they paid for him to Real Madrid. Their Spanish rivals FC Barcelona had shown interest in the player but the clubs couldn't agree on a fee, then Robinho had lucrative offers from Turkish clubs Fenerbahce and Besiktas but he wasn't interested in moving to the Bosporus. So it needed a late offer from Milan to end his misery and take him back to southern Europe.

For Milan it is the second prize catch in days after signing Zlatan Ibrahimovic on loan from Barcelona in their push to challenge city rivals Inter Milan, who have won five Serie A titles in a row and last season won a historic treble. Robinho underwent a successful medical yesterday in Milano and joins fellow Brazilians Ronaldinho and Alexandre Pato at the club for an estimated 18 Million Euros transfer fee.
Diposting oleh Unknown di 16.12