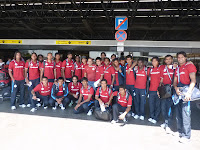 The Indian national team left Portugal yesterday for Bangkok for their international friendly against Thailand on Saturday after a two month long sojourn in Leiria and Lisbon. Once more the camp on the Iberian peninsula was organised by Nuno Mousinho-Esteves' company Spunp, the fourth such summer camp since 2007.

Like in the years earlier the camp had been planned by coach Bob Houghton in such a way to prepare the team for tougher assignments ahead. But unlike the last three years when the camp was about a month's duration, this years camp was for two months keeping the 2011 AFC Asian Cup in Qatar in January 2011 in mind. The focus was to lay the physical and tactical basis for the team to play tougher opponents in the continental competition.

While in Portugal India also played 10 friendly matches and they have a solid track record. They won six of those matches, drew two and only lost two. The matches where against Portuguese second and third division sides, who some AIFF officials back home in India thought weren't strong enough opposition keeping in mind that we face Australia, South Korea and Bahrain in the Asian Cup. And this surely is a point of debate. If I was in-charge I would played one marque match either against a low level European national team to get points for the FIFA world rankings or against a Portuguese first division side, not Benfica or Sporting Lisbon but a side which is lower first division level. This might have given Bob an indication were his team stands against bigger opposition at this time of the preparations.

INDIA's results in the friendly matches


But not all was well during the trip. Captain Baichung Bhutia had to travel home for a few weeks due to a thyroid problem and other players like Climax Lawrence, Samir Naik and Steven Dias to name a few had injuries, so they couldn't train over the complete camp. But there was also good news as Sunil Chhetri joined the camp after getting a release from his MLS club Kansas City Wizards.

Now the focus shifts from training to match practice. First-up a double header against Thailand coached by former Manchester United star Bryan Robson. India first travel to Bangkok to face the Thais on Saturday, September 4 and then we host the Thais at Delhi's Ambedkar Stadium on Wednesday, September 8. The matches and their venues thereafter will be finalised in the coming week once India is back from their long trip away.
Diposting oleh Unknown di 04.50