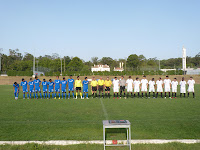 India continued their 2011 AFC Asian Cup preparations in Portugal with a 1-0 win against Real Massamá SC, a Portuguese second division side, tonight. Striker Mohammed Rafi scored the winner early on in the seventh minute to seal India's fourth victory in six matches.

But actually the results don't really matter that much as the match practice against tougher European opposition is what coach Bob Houghton is looking for. Only yesterday the team had played out a goalless draw against another second division outfit in Casa Pia AC also from Lisbon. And Bob used two different sides to play the matches over the last couple of days to give match exposure to as many players as possible.

Some players like Samir Naik, Climax Lawrence and Steven Dias are still nursing some injury so haven't played in recent games, but the team yesterday welcomed back MLS returnee Sunil Chhetri in match action, while captain Baichung Bhutia after his thyroid problems has also returned to Portugal and rejoined the squad.

The result in Portugal so far speak for themselves. In their first two games against third division outfits India won 4-1 against Caldas SC and then trashed GDR Monsanto 6-2, before facing tougher second division outfits. The first game was won against Atletico CP 1-0, before suffering the only loss so far came in their fourth friendly against SU Sintrense, a lone goal defeat.

But as said the results now don't count, they are just part of the preparations. The results in Qatar in January 2011 count when we face Australia, South Korea and Bahrain.
Diposting oleh Unknown di 14.02