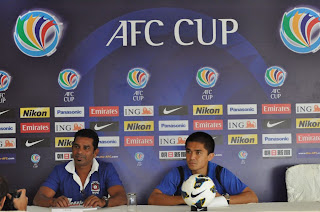 Churchill Brothers SC are on the verge of regaining the I-League title, but at the continental level they face Kitchee SC from Hongkong tomorrow in their Group E Round 5 match of the AFC Cup at the Shri Shiv Chhatrapati Sports Complex in Pune. The Red Machines have four points from as many matches and trail Kitchee by two points, who are second behind Semen Padang on 10 points.

At the pre-match press conference Churchill Brothers head coach Willy Moraes said, "We do have alot of injuries i.e. Beto, Tomba Singh, Bikramjit Singh and Felix D'Souza. But this team is raring to go and we are confident of gaining three points from tomorrows match."

"Yes, we did lose our previous game to Kitchee however this is a different ball game since the kick off is at 3pm and our team has got better since the last match," Willy Moraes added.

An in-form India captain Sunil Chhetri said, "We have four points and have a serious chance of qualifying for the next stage if we win the match vs Kitchee SC. We are still struggling with injuries, but the AFC Cup is very important to us, players getting injured is part of the game."

Speaking about the pitch Sunil stated, "The pitch is great and we are extremely happy with the support that we have got here in Pune."

"I'm very happy to be in this team, we have an outstanding unit out here, this team stands united and life has been pretty good at Churchill Brothers," Sunil added. 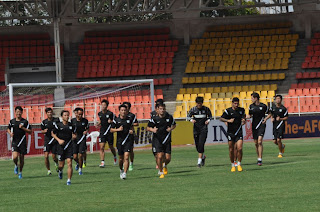 Meanwhile Kitchee SC after two wins at the start suffered two losses against group leaders Semen Padang of Indonesia, which has given the chance to Churchill Brothers and even Warrior FC of Singapore to move past them into second spot and qualify for the pre-quarterfinals.

Kitchee's Spanish head coach Josep Gombau Balague said, "Tomorrow is a very important match, the difference between Churchill Brothers and Kitchee is only two points. We will try to play are normal passing game."

"Churchill is a team that is doing well and are very strong. Even if we get a point here, if we win the next match we can qualify for the next stage," Josep Gombau added.