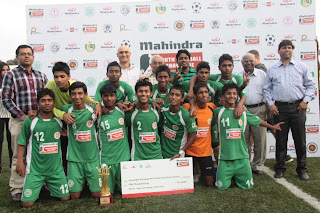 The tournament gave India's finest under-14 football players from schools across six Indian cities and states a wonderful opportunity to display their skills and battle it out in a series of highly competitive matches.

The Mahindra Youth Football Challenge is the Mahindra Group's commitment to promote football at the grassroots level. The company has partnered with Scottish football giants, Celtic Football Club, who will take on the responsibility of training and developing young talent identified through the initiative.

Mohammad Habib, Umesh Das and Sumit Das stole the limelight with their superlative performances to help fashion a 4-1 victory over Don Bosco High School Panjim to emerge champions. The Kolkata team had impressed coaches from Celtic FC and onlookers with their excellent performances that proved too strong for their counterparts from Goa. 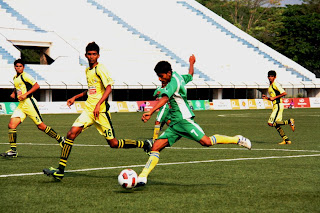 In a first half that was marked by a high-speed attacking game by Kolkata, the prolific Umesh Das scored the first goal with a sharp hit that caught the Panjim goalkeeper unaware in the 3rd minute of the game. In the 13th minute, this was followed by a second by striker Habib. The boys continued to show case their unbeatable skill as a third goal was scored off a rebound by striker Sumit Das and a fourth off a header by Mohammad Habib shortly before half-time.

The second half was characterized by better-quality defence by the team from Panjim. Trailing four goals to none, the boys from Don Bosco took the field with rejuvenated vigour which resulted in a confidence-building goal by Glevito S. Miranda in the 49th minute of the final match. However, the efforts were not enough to turn the game in their favour. Umesh Das from Kolkata was adjudged the Star Performer of the match for his outstanding performance in the high-pressure match.

The list of 22 players short-listed for the 4 day training camp was also announced. To be conducted under the watchful eyes of coaches from Celtic FC, 2 – 4 boys will be chosen to travel to Glasgow to train at the home of Celtic FC.