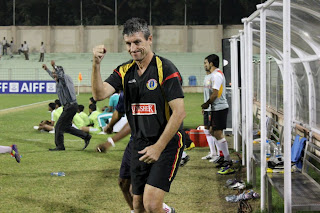 East Bengal Club coach Trevor James Morgan stays the flavour of the season. From winning the Federation Cup to tasting success in the ongoing AFC Cup, East Bengal have been the side to beat. In a freewheeling interview with AIFF Media, Morgan reflects on his time with East Bengal, the AFC Cup, the expectations, chances of winning the I-League and much more.


You already have one foot in the Round of 16 of the AFC Cup, a feat which East Bengal last achieved in 2004. What are your expectations?

It will certainly be a great achievement to qualify from the Group Stage of the AFC Cup. But we haven't sealed it as yet – we need one more point for that. I feel proud the manner my boys played – both at home and away. To overcome such a hectic schedule is not a joke. At the start of the season our target was to get through to the next round and I am glad we have almost achieved it.

The next round will be a tough one but the way my team has played so far, I strongly feel we can progress further. But I reiterate, we haven't qualified for the next stage as yet.


You stay five points behind leaders Churchill Brothers in the I-League. Do you still believe you can win it?

We have to believe we can still clinch it - otherwise what's the point? Having said that, you need to remember that Churchill (Brothers) are in great form and there is no reason to think that they will drop points. But stranger things have happened in football. We have to make sure we win the four matches and hope Churchill drop points. Without hope and belief, the purpose of playing stays defeated.


You have every feather on your cap except the I-league. Is it frustrating to be so close to the League and not having won it ever?

I don't lose sleep over not winning the I-League. We play in so many competitions throughout the season and there are bound to be spells where a team loses. I am more focused on the overall development of the club, and I as I see it we have improved leaps and bounds over the last three years.

We have won the Federation Cup twice and even the Calcutta Football League (CFL) and the IFA Shield. We have finished runners-up twice in the I-League. I think we are on the right track and the credit goes to the boys.


Describe your three years with East Bengal. What has been the secret behind the success?

We have got good players and a settled system. When a new recruit joins the club, he quickly learns the ropes and that is fantastic. My boys work really hard and give their best. There is no secret as such. Hard work has paid dividends.


Can you educate us about your rotation policy of players.

When you are playing an I-League game on Saturday and then turning up for a CFL match next week on Tuesday, you have to shuffle your squad to avoid fatigue. I am blessed with an excellent squad and in my three years with the club, this year we have the strongest set. Our bench strength is very good and that allows me to do what I do.


What stays your finest hour with the Red and Gold?

(Laughs). There have been quite a few. But to pin-point one, it has to be winning the first Federation Cup, within three months of my arrival. I was a relatively unknown face in Indian football and that triumph made people trust in me as a Coach. Most importantly, it gave my players the confidence and belief. That confidence started evolving and we believed we could beat any team. That win made it possible.


Are you satisfied with the manner the club has shaped up under you in the last three years.

Personally, I take great satisfaction from the fact that the club has achieved considerable success over the past three years. I would not be able to compare it with the past as I have little knowledge. But yes, the boys have been exceptional and to see them and the club grow in front of my eyes was heartening.

Yes we have not won the I-League which is the most coveted crown but the fact that we have stood up to our reputation every inch was magnificent. In the League too we have been very consistent. In Cup Competitions we have been superb. I am a happy man.