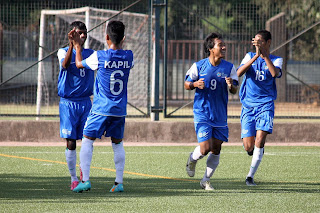 The AIFF's Under-15 Regional Academy based in Navi Mumbai extended their winning streak to nine matches as they beat another Mumbai Division outfit Rashtriya Chemicals & Fertilizers (RCF) 2-1 in the return-leg fixture of their friendly hosted at the Fr. Agnel's Ground, Navi Mumbai.

Rakesh Oram and Delbert Fernandes scored in each half to ensure they notch up a remarkable double against their much more fancied opponents. The previous encounter played at the RCF Grounds in Chembur ended with an identical score-line.

Winger Oram opened the scoring as early as the fifth minute with a trademark run down the left flank followed by a cool finish in a one-on-one situation with the opposition keeper. The RCF players, still reeling from the previous loss on their home turf three weeks ago, had reinforced their line-up with fresh faces but still struggled to make any inroads into the final third courtesy of a very sturdy defensive performance by the Academy boys in the first half.

Post the breather and following Head Coach Sajid Dar's six substitutions, the boys took control of the game with midfielders Hayden Fernandes and Jayson Lucas dictating terms in the middle of the pitch and full backs Kapil Boro and Situ Basumatary providing some much needed width on the flanks with their tireless running and crosses into the box.

The second goal came in the 65th minute with defender Gursimat Singh Gill's precise long ball from the halfway-line was intelligently chested down by Indermohan Singh Hundal and into the path of on-rushing striker Delbert Fernandes who blasted the ball into the back of the net. RCF pulled one back in the 90th minute but it was all too little too late.