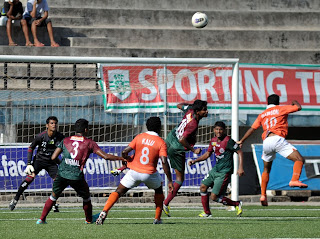 Kolkata giants Mohun Bagan AC will look at the morale-boosting 5-1 win against Sporting Clube de Goa in the previous round when they take on Mumbai FC in a rescheduled Round 14 match of the I-League at the Kalyani Stadium later today.

The success of the lethal attacking pair of Odafe Onyeka Okolie and Tolgay Ozbey – who scored three and two in realizing the big win hardly two days ago – is doubling the confidence of their Moroccan coach Karim Bencherifa.

"They always had good understanding and that has been proved once again," Karim said about the two strikers.

"We earned successive wins in our last two outings and that has enhanced the confidence of the players. But have to keep working hard as we are yet to be safely out of the relegation zone," Karim said ahead his team's match against Mumbai FC.

Mohun Bagan beat two Goa heavyweights in Dempo SC (2-1) and Sporting Clube (5-1), which has given Karim the confidence to look for more.

"Our objective will be to clear out of the relegation zone and to realize that we need more good wins," Karim said looking at Mohun Bagan's current position. Mohun Bagan, who have been asked to start afresh after being penalized of all their points earned in the first 10 rounds, are placed 13th with 16 points from 19 matches while Mumbai FC are sixth with 30 points from 22 rounds.

"Our opponents are a strong side and have done well so far. But I would like to focus on our own game and hope we play true to our potential," Karim said.

Meanwhile Mumbai FC coach Khalid Jamil said, "They have a good attack with strikers like Odafa and Tolgay. We have a plan in place for them and will try to stick to it."

Mumbai FC beat vity rivals Air India in Pune in the previous round after a spate of losses and draws, and Jamil banked on the latest success of his team in hoping for a repeat of the positive result.

"Mohun Bagan have the home advantage and are a strong side but we hope to continue with the momentum and give a good fight to our opponents," Jamil said.