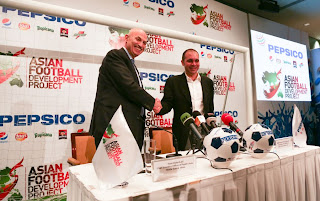 In a ground-breaking initiative for social development and for the sports community, global food and beverage leader PepsiCo, announced that it has entered into a one-year strategic partnership with the Asian Football Development Project (AFDP). Under the theme 'Kick for Hope', the partnership will cover over 40 countries with a special focus on India.

The signing of the agreement will see both PepsiCo and AFDP join hands in the execution of major social responsibility projects using football as a tool for social development in at least 18 countries throughout Asia in 2013 and touching the lives of thousands of people. The focus will be on India and 11 countries in the Middle East including the UAE, Jordan, Saudi Arabia, Kuwait, Qatar, Oman, Bahrain, Iraq, Lebanon, and Yemen.

Across all countries, PepsiCo will be joining AFDP in the execution of special grassroots football projects or initiating new ones; in addition to building on the power and popularity of the game to increase participation of women and youth. In India, PepsiCo and AFDP will be partnering with Magic Bus India Foundation, a Sport for Development organisation. As part of the partnership, PepsiCo and AFDP will support Magic Bus Sport for Development (S4D) programme across Indian states - Andhra Pradesh, Delhi, Karnataka and Maharashtra to provide sports opportunities for marginalised community youth and women in India.

Joint awareness raising activities to promote the importance of football for health and well-being and as a driver for social development will also take place throughout the year. Moreover, capacity building and training is planned for coaches and referees.

The AFDP is the brainchild of HRH Prince Ali Bin Al Hussein of the Hashemite Kingdom of Jordan who has dedicated his personal time and effort to roll out the project throughout Asia. Football plays an important role in shaping the culture of many societies and the AFDP aims to encourage social inclusion and participation by all members of society in the game with a particular emphasis on women and youth.

"We are extremely happy to be partnering with PepsiCo - not only are they a world-leading company but one that is totally committed to social development particularly in relation to the education of youth and empowerment of women through sport. This is a perfect fit with AFDP's mission and values, and we are also striving to implement the same level of best-practice PepsiCo exhibit in their everyday business. With PepsiCo as our partner, we know that we can work closely together to capitalize on the unique power of the world's favourite game to drive positive social change and promote sustainable development across Asia." said HRH Prince Ali Bin Al Hussein. 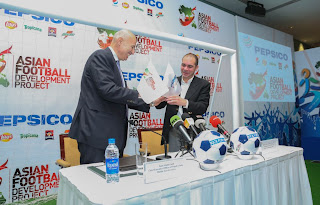 "PepsiCo has a long association with football, the world's most popular sport and we strongly believe that it is a powerful agent for social change and development," said Saad Abdul-Latif, Chief Executive Officer, PepsiCo Asia, Middle East & Africa. "As we enter into this strategic partnership with the AFDP, we trust that through our shared values and the strength of our conviction in the power of the game to drive social development, we will be able to positively impact local communities in Asia and in the Middle East," he added.

Women¨s football in the Middle East and India is developing strongly, and, with the projects to be rolled out as part of this partnership and under the theme of 'Kick for Hope', it is anticipated to grow even further.

"We at AFDP very much admire PepsiCo's long-standing commitment to empowering women especially in the Middle East and India where there are many challenges to overcome and stereotypes to break. Together with PepsiCo we hope to further facilitate access to safe environments where women and girls can get together and actively engage in a fun, healthy and safe sport that builds character and teaches social skills which are useful on and off the field, both football and society as a whole in Asia can only benefit from that," said HRH Prince Ali Bin Al Hussein.

"We believe that the strength of the PepsiCo brand is in a community relations context, and the projects planned as part of our partnership are all about empowerment to encourage greater participation in football by women and youth. The core of this partnership is grassroots football, realizing dreams and giving opportunities to those who are less fortunate and PepsiCo is proud to be part of that."

AFDP and PepsiCo will jointly encourage the creation of women's football tournaments in the countries covered by the agreement with a focus on the Middle East and India.

"Women's football is one of, if not the fastest growing sports internationally. There are now over 30 million women and girls playing around the globe, and many of them have dreams to play at elite level, to represent their countries with pride, and some even to become World Champions like our talented Japanese sisters. PepsiCo's support will enable AFDP to create more new pathways for young women - even those from marginalized areas - to achieve such dreams. That is very important to AFDP. The game at all levels must be accessible to all," said HRH Prince Ali Bin Al Hussein.

"This partnership will also support youth football programmes in the Middle East and India at a grassroots level. The benefits of organised, competitive sports to young people cannot be overstated," said Saad Abdul-Latif. "Football encourages team spirit, fitness and healthy competition which are all valuable life lessons for young people as they build their future," he added.

The AFDP has supported nationwide grassroots programmes in several Asian countries. For example, in the Philippines, a programme for 6-12 year old children in schools, regional football associations and clubs across 33 regions is well underway, while in Chinese Taipei, nationwide youth leagues for Under-10 and Under-12 boys and girls have been introduced.

PepsiCo as well has a long history and close association with football which is well rooted in its Pepsi brand campaigns but more importantly in its signature social responsibility projects focused on building the skills of youth in the field of football.

The AFDP is focused on increasing its impact through request-based project support in various Asian countries. The AFDP aims to implement at least 10 new projects this year in the Middle East and India, such as Mine Awareness projects for refugees in Jordan, and hopes to have as many as 217 teams comprising 2,540 children participating in the Chinese Taipei Youth League.

In one of the AFDP's established projects, the Faisal Cup for Underprivileged and Refugee Children, organized in Kuala Lumpur, Malaysia, saw the participation of over 600 children and 1,100 community members. In Cambodia, the AFDP is providing full-time training, housing and educational opportunities for 30 girls at risk of human trafficking. The grassroots football initiative in Bhutan is benefiting as many as 3,000 students and 200 teachers in 100 schools, and, in India, it is also organising football programmes benefiting 250,000 underprivileged children.
Diposting oleh Unknown di 15.57