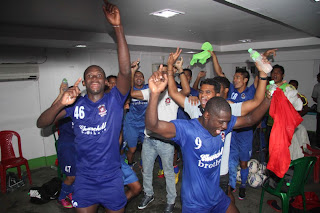 I-League leaders Churchill Brothers SC scored a vital 2-0 away win against Mohun Bagan AC at the Kalyani Municipal Stadium this afternoon to take a giant step towards regaining the I-League title. The Red Machines are now on 51 points from 24 matches, eight ahead of East Bengal and Pune FC but the duo have played a match less.

Churchill Brothers match winner was their Gabonese striker Henry Antchouet, who scored both the goals in the first session - 19th and 34th minutes to win the match for them.

Meanwhile Mohun Bagan's five match unbeaten run - four wins and a draw, came to a premature end against a better opponent and their fight for survival in the relegation battle continues as they stay in 12th spot with 22 points from 22 games.

Churchill Brothers took a 19th minute lead when Sunil Chhetri lay the ball perfectly for Henry Antchouet and the striker placed the ball to the right of keeper Shilton Pal. And in the 34th minute Henry was at it again this time latching on to a Sandip Nandy goal-kick, which he easily collected, beat Nirmal Chettri and placed past Shilton Pal.

At the other end Mohun Bagan did have their chances, but former Churchill Brothers striker Odafe Onyeka Okolie could not score against his former side as his few good efforts were either wide or saved by a very strong Sandip Nandy in goal.

In the end Churchill Brothers won 2-0 and moved closer to the title.
Diposting oleh Unknown di 14.59