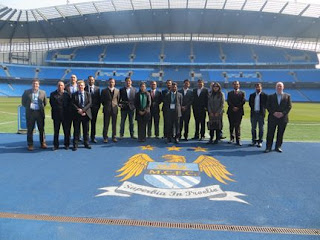 A 25 member strong Indian delegation which has come to Manchester for the Soccerex European Forum were treated to a presentation and stadium tour by the current Premier League champions Manchester City at their Etihad Stadium yesterday.

The FICCI – Libero Sports India delegation arrived at the Ethiad Stadium yesterday morning and were greeted by Manchester City legend Mike Summerbee prior to listening to a presentation on Manchester City's international business objectives by senior management Tom Glick and Omar Barreda.

After the presentation the delegation took a private tour of the state of the art Ethiad Stadium before heading back to Manchester Central for the Soccerex European Forum.

Chris Punnakkattu Daniel said about the tour, "The visit to Manchester City FC and the Etihad Stadium was an interesting one to get an in-depth idea on the club, the facilities and their plans for India - especially in comparison to other leagues like the Bundesliga."

The India delegation to Soccerex is an initiative driven by FICCI and Libero Sports India to connect key industry stakeholders with the global football community.
Diposting oleh Unknown di 08.54