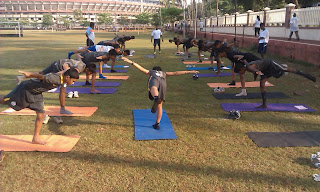 A 21-member Indian team will be participating in the AFC Under-14 Championship to be held in Mashhad, Iran. Besides hosts Iran, India will face Turkmenistan, Kyrgyzstan and Pakistan in Group D.

The India Under-14 squad leaves for Iran early tomorrow morning.