I-League: ONGC aim to finish on a high at home in Delhi 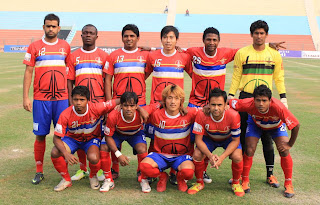 For ONGC Delhi's Ambedkar Stadium stays their fortress and Coach Santosh Kashyap, the bandmaster. From whipping boys to giants at home, Kashyap has waved his magic wand since taking up the reins last December.

Under Kashyap, ONGC have lost only twice, against Mohun Bagan (away) and Pune FC at home. They have won seven and drew five matches. And tomorrow they will play their last home match of the 2012/13 I-League season against Mumbai FC at the Ambedkar Stadium.

"The game against Mumbai FC is of huge importance for us. Our aim was to finish in the top seven. The loss to Pune FC meant we had to go down in the table. So a win will once again bring our campaign back on track," Kashyap says at one breath. "This being our last home match, I am hoping for a good display," he added.

He further pointed out that the mid-table battle is very close with virtually nothing among four clubs. "Salgaocar, Sporting Clube de Goa, Mumbai FC and ONGC have nothing between them. Anyone of them can finish sixth. So we will go all out," he quips.

At their own backyard, ONGC have kept table-toppers Churchill Brothers at bay apart from getting the better of second-placed East Bengal, defending champions Dempo SC and Salgaocar amongst others.

"The irony stays that we face several injury problems," Kashyap informs. "Against Pune FC, we had several key players missing. The likes of Robin (Gurung), Kenistan, Bimal (Minz) will miss the tie. Sandeep Sangha is also out after picking up a knock in the last game."

Looking back Kashyap added, "When I joined in December, the team looked in tatters, especially in the attacking third. I focussed on improving the aspect. The boys responded in style. In such a short span, the way they adapted was incredible. They deserve all the credit."

Mumbai FC on the other hand, will be looking to enjoy the game and 'go with the flow'.

"With two matches to go we have nothing to aim. We have saved relegation and have played decent enough. At present, we are preparing for the next season. We will field some youngsters in our remaining two matches," Mumbai FC Coach Khalid Jamil said.

Both the teams have 30 points from 24 matches.