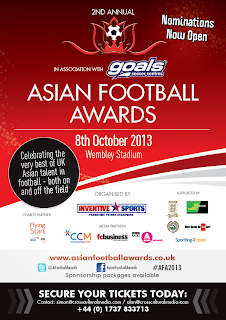 The second annual Asian Football Awards (AFA) will be held at the home of English football, Wembley Stadium, on October 8, 2013 and will once more be organised by Inventive Sports. The formal press launch reception was held at the Houses of Parliament, Westminster on March 26, 2013.

The inaugural event in 2012 attracted over 300 representatives from grassroots clubs and businesses in the football arena to a number of current and former players and personnel – not just from the United Kingdom but around the world.

With support and representation from the likes of The FA, PFA, Kick It Out, Show Racism The Red Card and Sporting Equals the first event proved to be a huge success which was recognised by football organisations and clubs around the UK. The event hosted esteemed guests from the football establishment like David Bernstein (FA Chairman), ex-Chelsea defenders Paul Elliot and Graham Le Saux, BBC Sport presenter Manish Bhasin and award-winning journalist and author Mihir Bose.

"The Asian Football Awards have been created to recognise and reward Asians in football in the UK. We aim to provide a platform for Asians to promote their skills whilst also showing the footballing world that coaches, volunteers, players, administrators and fans are Asians who simply love the game," explains founder of the AFA Baljit Rihal.

This year, Sky Sports' Dharmesh Seth and BBC Asian Network's DJ Noreen Khan will co-host the awards show which will be held again at the iconic Wembley Stadium. For 2013, The Asian Football Awards have attracted a higher profile of sponsors with a greater input and support from many of the UKs top clubs and football organisations.

This year, their headline sponsor GOALS Soccer Centres will be hosting 'The AFA Trophy' tournament nationwide with a number of other new awards to be introduced as the profile of Asians in Football continues to rise.

"Our aim is to see a steady stream of Asian footballers making their debuts at league clubs across the UK… It's only a matter of time before this is a reality as there are so many talented players on the peripherals of making it," explains founder of the AFA Baljit Rihal.

The AFA 2013 ceremony will be a star-studded event once again with dignitaries from the world of football as well as a number of prominent celebrities and footballers. With an anticipated audience of over 500 attending, The Asian Football Awards 2013 promises to be a fantastic opportunity to witness inspirational Asians in Football, first hand.
Diposting oleh Unknown di 15.24