AIFF Open House Meeting to be held tomorrow in Dubai 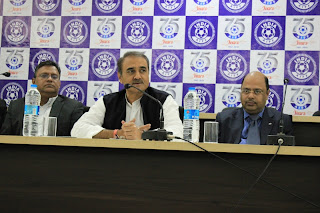 The All India Football Federation's second Open House meeting to secure a minimum of two Football Clubs on board for the next edition of the I-League will be held at the Ritz Carlton hotel, DIFC in Dubai tomorrow. The meeting will be chaired by AIFF President Praful Patel. The earlier Open House meeting was held at AIFF Football House on March 5.

The meeting, being hosted by the AIFF will bring to the fore the Governing Body's expectations from the new clubs, interact with potential participants, share ideas and invite suggestions from interested parties.

"In keeping with AIFF's mission of promoting Indian football to a larger Global Audience, this is a vital step being taken to adopt additional teams and invest in our youth," Praful Patel said.

"By inviting participation from regional investors and offering them a sound investment opportunity, we are certain we will be able to raise the brand value of the I-League, evolving it to become a truly futuristic and versatile tournament," he added.

The opportunity to set-up new football clubs also carries an incentive for investors to invest in the youth and develop the infrastructure necessary to create a State-of-the-Art environment where the youth can be engaged, football teams can be developed and the sport can be promoted.