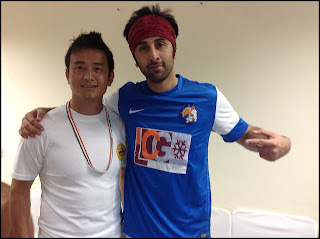 On the sidelines of a Bollywood Stars vs Cricketers charity match in New Delhi, Bollywood heartthrob Ranbir Kapoor was named as the new brand ambassador of struggling I-League side United Sikkim FC.

Ranbir will be supporting and helping the club and if things work out, then he could be coming to Gangtok to watch a United Sikkim match soon.

Ranbir's message for United Sikkim players, "To all the players in United Sikkim, all the best. You guys have a great leader in Baichung and I hope you guys take it up!"

"It is a great honour for United Sikkim to have Ranbir as our brand ambassador. He has millions of fans and we hope that his fans would also follow United Sikkim," said USFC CEO and Baichung Bhutia.

The Bollywood connection with United Sikkim FC already exists with Neha Dhupia, John Abraham and Rahul Bose being supporters and well-wishers of the club due to their close friendship with ex-India captain Baichung Bhutia.
Diposting oleh Unknown di 02.02