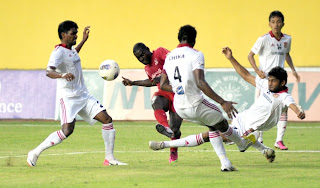 Goan side Churchill Brothers SC took a giant step towards regaining the I-League title after scoring a 2-1 victory over Pune FC in a Round 23 clash at the Tilak Maidan in Vasco this evening.

After a barren session where the teams hardly gave the other side an inch, T. Bineesh Balan and Sunil Chhetri struck majestically to give Churchill Brothers a five-point lead at the top of the table with just four matches left to be played. Pune FC, also nursing title ambitions, were left to ponder on their defensive frailties as both goals they conceded stemmed from mistakes at the back. Substitute Boima Karpeh could only pull on back for Pune FC.

Both teams were understandably nervous at the start and played extremely safe. It were the hosts, though, who created the better chances as Henry Arnaud Antchouet Rebienot, in the 10th minute, laid a ball for Afghanistan striker Balal Arezou who could not guide it into the goal. Sunil Chhetri then drilled a low ball through for Henry but the Gabonese striker delayed, allowing a rival defender to dispossess him. Pune FC did not have any clear chances in the first session with James Moga left stranded.

In the second session, Churchill took the lead. Much of the blame should be shouldered by goalkeeper Shahinlal Meloly whose poor goal-kick saw Henry trap the ball and lay it for substitute T. Bineesh Balan who showed remarkable poise to finish from a narrow angle in the 57th minute.

Churchill made it 2-0 only five minutes later when another defensive mistake allowed Sunil Chhetri the space to curl a brilliant left-footer into the top corner of the net. It could have been all over for Pune FC almost immediately but the goalkeeper Shahinlal redeemed himself with two quick saves to deny Chhetri and Balal.

Towards the end, Churchill pressed more men forward but the Churchill Brothers defence stood its ground. It was not until added time that Boima Karpeh pulled one back for Pune FC, providing for a nervy five minute in injury time towards the end.