Former champions India have failed to qualify for the 2014 AFC Challenge Cup in Maldives. That was known for some time, but due to the late pullout of Brunei it was not clear which two sides would qualify as the best two teams amongst the five qualification groups.

In the end Laos and Turkmenistan have received the tickets to next year's finals as the two best runners-up as they join hosts Maldives plus the five group winners Myanmar, Kyrgyzstan, Afghanistan, Palestine and the Philippines in their quest to qualify for the 2015 AFC Asian Cup.

The non-participation of Brunei in Group E meant that the results of the matches in the four other groups between the runner-up and the bottom-placed team were declared null and void based on Article 16.1 and Appendix 2 of the tournament regulations.

With these results no longer being factored into the outcome, Laos emerged as the best of the second-placed team with four points. Turkmenistan, AFC Challenge Cup runners-up in 2012 and 2010, took the second ticket to the Maldives, with their superior goal difference separating them from 2008 champions India, Bangladesh and inaugural winners Tajikistan of 2006, who all finished with three points. 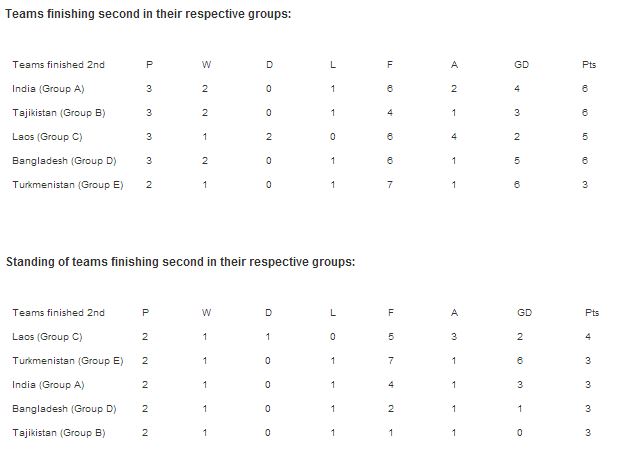