I had reported about it earlier this month on my blog (Dodsal FC change name to Mumbai Tigers) now there has been an official statement from the Mumbai-based club.

Dodsal FC, Mumbai's newest professional football club officially announced the renaming of the club to 'Mumbai Tigers'. The Dodsal Group is headed by Rajen Khilachand, which is a diversified multinational conglomerate headquartered in Dubai, the United Arab Emirates. The key objective of this move was to enhance and to generate an identity and connectivity with the residents of Mumbai City.

The Mumbai Tigers have had an impressive start to their I-League Division 2 campaign by winning three of the four matches in the preliminary round. They beat Vasco SC thanks to a 21st minute solid strike by Mohammed Rafi. Mumbai Tiger’s Demba Diakhate also has been in great form in the knockout stages by scoring three goals till now. 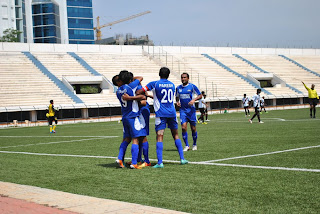 The Mumbai Tigers are currently top of their Group C and are one of the favorites' to qualify for next seasons I-League.

In less than a year of its launch, Mumbai Tigers (erstwhile Dodsal FC) has already created a substantial buzz in the Indian football community. The club made its debut by participating in India's oldest football tournament, the Durand Cup 2012 and made its way to the finals. From there, they went on to lift the Nadkarni Cup by defeating local Mumbai-based football teams.

Led by one of India's renowned coach, Bimal Ghosh, Mumbai Tigers has a youthful balance of experienced footballers as well as talented youngsters from India and other nations.
Diposting oleh Unknown di 03.11