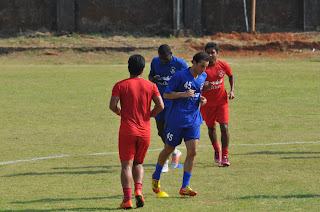 Second-placed Churchill Brothers SC will want to restart their I-League campaign with a win against Air India at the Duler Ground in Mapusa later today as they are a point behind East Bengal Club on 39 points, but have played two matches less.

The Red Machines will have India captain Sunil Chhetri and defender Lamine Tamba making their debut for the Goans in the I-League after having both already played for the club in the Goa Pro League and the AFC Cup.

Coach Mariano Dias speaking about Sunil Chhetri said, "He has already played three games for us, he is combining well with the team. Since he has played with Denzil, Lenny, Steven, Beto before, he is settling well into the team."

Also finally Afghanistan striker Belal Arezou has arrived in Goa after his visa issues were sorted and he will be available for tomorrows match though Mariano Dias said, "He has not practiced much with the team, though he has match fitness since he has played games for Afghanistan. He will start from the bench and hope he combines well with the team when he is brought into the game."

Meanwhile left back Thangjam Saran Singh is out with a calf injury while Lebanese duo Bilal Sheikh El Najjarin and Akram Moghrabi have left the club, but Churchill Brothers hope that they can overcome the Airmen to go top of the I-League.
Diposting oleh Unknown di 00.02