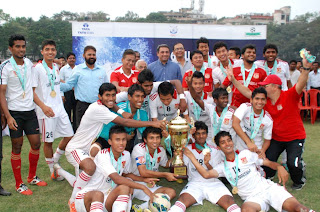 The Under-20 team of Pune FC have retained their I-League Under-20 Tournament crown for the second consecutive year by remaining unbeaten in the final round of the competition in Jamshedpur.

Pune FC held their heads high throughout the final phase finishing with 13 points from five matches, winning four of their matches and drawing one.