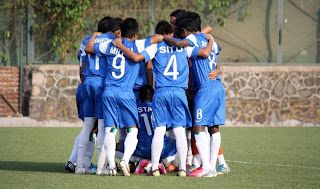 The deadlock was broken barely seconds into the game when winger Rakesh Oram capitalised on a defensive lapse and crossed into the box for an ice-cool striker Stany Braganca to slot home. The Academy boys made it 2-0 in the 32th minute when midfielder Milan Basumatary made amends for a missed penalty a minute earlier with a delightful cross to the far post which was met by a thunderous half-volley by Oram. The winger doubled his tally three minutes later when he followed Robinson Singh's through ball, beat the off-side trap and placed it past the rival goalkeeper to make it 3-0. Bidyananda Singh's tap-in at the stroke of half-time ensured that the boys went into the break with a comfortable 4-0 lead.

The rout was completed in the 62nd minute by midfielder Hayden Fernandes as his powerful shot from around 40 yards left the keeper with no chance. It ended 5-0 for the AIFF Navi Mumbai Regional Academy against the second tier Mumbai side Income Tax SC.

The game also marked the return of Suman Sarkar to competitive play after his knee surgery last month.