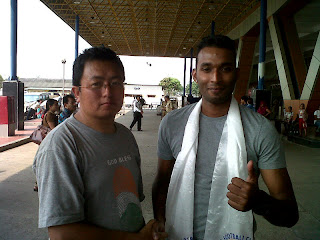 Malaysian Footballer Stevenson Sundara Segaran arrived in Bagdogra Airport yesterday afternoon to join with North Bengal side Share FC for training in Kalimpong. His aim is to play in the I-league or any other professional club of the country and has accepted Share FC's offer to practice with the club players which will help him to acclimatize in Indian conditions.

Stevenson said, "I look forward to training with Share Football Club and hope I can offer also help out the younger players there, also I am looking forward to seeing Kalimpong and enjoying my time there."

Stevenson has had a stint with a Football Academy in Brazil in 2006 and plays as a midfielder. Last season he had played in the Kuala Lumpur First Division League in Malaysia.

Stevenson's first match for Share FC might be on April 6 when the club will turn out to play in an exhibition match against IIS Football Club from Thailand at Mela Ground in Kalimpong.

IIS FC is a team made-up of players from Ramkhamhaeng University which is based in Bangkok. This match is being hosted by Share FC for the general entertainment of the football loving people of Kalimpong and also to give its footballers that feel of playing against a quality foreign side.

The Share FC General Secretary said, "We welcome Stevenson with open arms and we are also thankful to him for accepting our proposal of training with a small club like ours, this has proved in a small way that we are moving in the right direction, We will provide all our support to Stevenson."

Stevenson reached Kalimpong last evening and is expected to have this first training session with his new team today itself.
Diposting oleh Unknown di 18.00