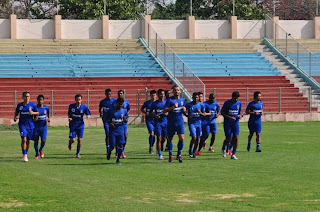 The Technical Director of I-League title contenders Churchill Brothers SC, Subhas Bhowmick, used the perfect adage to make it clear that hosts ONGC will be no pushovers when the two sides meet in a Round 21 match of the I-League at the Ambedkar Stadium tomorrow afternoon.

"There is many a slip between the cup and lip. I have always maintained that in the top-tier competition no team can be taken lightly. Moreover, ONGC have been very good at home and they have the players who have the potential to turn it around against big teams," Subhas Bhowmick told AIFF Media on the eve of the match. "We cannot take it easy as we are top of the table. We have to put our best foot forward," he added.

Churchill Brothers are top of the heap at the moment with 42 points from 19 matches, and have played a game less than second placed East Bengal Club who have 40 points from 20 matches. But Bhowmick is not keen to read too much into the statistics tilting in their favour.

"I reiterate there can always be a slip between the cup and the lip. The I-League is the most beautiful thing that has ever happened to Indian football. The competitiveness is amazing and no team can be taken lightly. On a given day, anyone can beat anyone so you have to be on your toes all the time. This is the beauty of the League."

Citing an example he continued, "In 2002-03 season when I was with East Bengal, we were seven points clear at the top of the table. But eventually we lost the title. So nothing is guaranteed until you have crossed the final hurdle."

The former India striker also hinted at Sunil Chhetri getting back to his best. "We all know that Sunil is a prolific striker. He is one of India's finest talents. In the last match, he started for the first time since joining our ranks and his workload on the pitch was laudable. He is working really hard."

Meanwhile, the hosts who are sitting sixth in the table with 27 points from 20 outings, will be missing the services of midfielders Joel Sequeira, Sohrabuddin Mollick and defender Bimal Minz. "Our aim is to finish in the top half of the table. When I took over we were languishing bottom of the table. Now were at the other end of the spectrum. I think this is a massive achievement," ONGC Coach Santosh Kashyap maintained.

"The challenge is not over yet. We have to hold on to our position and in that quest our match against Churchill is very important. They are on top of the table. We have few injuries but I am confident with the players we have it will not be easy going for them."