Does Team India need long preparations ahead of friendlies & tournaments? 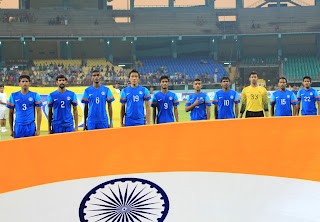 Since the end of the Group A qualifiers for the 2014 AFC Challenge Cup last week in Yangon, Myanmar I have been asking myself if Team India needs longer preparations ahead of the international friendlies and tournaments.

I am saying so as it is something that former India coach Bob Houghton used to say and insists on. He was no fan of one-off international friendlies on FIFA match dates, then that meant pulling out players for two to three days from their I-League clubs with minimal to no real match preparations.

And as friendlies against Singapore (0-2) and Palestine (2-4) under Wim Koevermans have shown such a schedule does not suit the Indian national team players well.

Now the 2014 AFC Challenge Cup qualifiers preparations in Pune weren't the best either as East Bengal Club and Churchill Brothers SC players had to leave the India camp to play AFC Cup matches for their clubs.

All these are factors to show what has hampered Team India lately as Bob Houghton minutely planned everything for the Nehru Cup's, AFC Challenge Cup and even the AFC Asian Cup in Qatar with long, planned camps. He even took out players from the I-League to prepare for the Asian Cup, the biggest tournament India played in years and maybe in years to come.

Therefore the above is something which needs to happen again and success will surely come...
Diposting oleh Unknown di 06.41