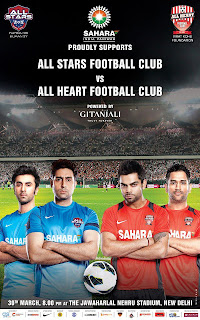 Tonight well-known Bollywood stars and players from the Indian Cricket team will be playing a charity football match at the Jawaharlal Nehru Stadium in New Delhi for a good cause titled 'Playing for Humanity' to raise money for NGO 'Magic Bus'.

On the other side Cricket World Cup star Virat Kohli is the captain for the Indian cricket team, which also includes Mahender Singh Dhoni, Suresh Raina, Yuvraj Singh and others.

Both sides know that the match is about raising money for charity, but they also want to win tonight.

The match will kick-off at 8pm IST at the Jawaharlal Nehru Stadium in New Delhi.
Diposting oleh Unknown di 02.44