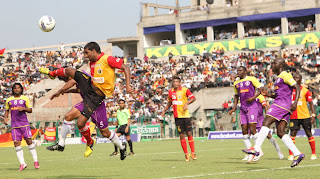 Kolkata giants East Bengal Club dropped two vital points in their quest to bring the title back to the City of Joy as their city rivals Prayag United SC came back from two goals down to draw two-all at the Kalyani Municipal Stadium.

The first session was a tactical affair with some rough tackles here and there. It was Chidi Edeh who gave the red-and-gold a 41st minute lead when he got a long ball forward on the right, beat Bello Rasaq and his firce shot could not be kept out by keeper Sangram Mukherjee as the ball hit both posts before going in.

After the break things got even better for East Bengal as in the 49th minute they earned a penalty as Sangram Mukherjee hacked down an onrushing Ishfaq Ahmed making a clumsy effort at clearing the ball. Striker Manandeep Singh placed the ball nicely to the other side of the keeper to give East Bengal a comfortable 2-0 lead.

But their goalkeeper Gurpreet Singh Sandhu spilled a straight forward collection of a Carlos Hernandez shot and let the ball slip home when he tried to block the powerful longranger in the 63rd minute. Suddenly Prayag United were in the game and they found the equaliser only three minutes later. Carlos sent a perfect through, that caught the East Bengal defence napping and released Ranty Martins Soleye free inside the box. The Nigerian made the most of the opportunity and fired the ball past a stranded Gurpreet.

East Bengal tried to regain the lead but failed in their bid as Sangram saved a 70th minute effort from Chidi while an open Ishfaq chip went wide of an open goal in the 82nd minute. And then in the last attack of the game Chidi scored, but the referee wrongly called an offside which would have been East Bengal's winner and ensured the crucial three points.