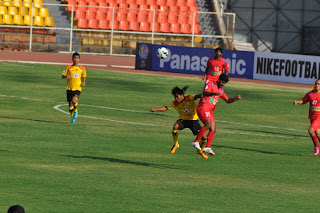 I-League side Churchill Brothers SC were held to a two-all draw by Indonesian club Semen Padang FC in their Group E Round 2 match of the AFC Cup at the Shri Shiv Chhatrapati Sports Complex in Pune yesterday afternoon.

After their opening round loss against Kitchee SC, the Red Machines were not really happy to pick-up a point as coach Mariano Dias said, "I am not happy with the game and we should have won this match. Their second goal was a gift. Our Goalkeeper is not to be blamed fore the second goal as there were two defensive mistakes and Beto was at his best."

India captain Sunil Chhetri had given Churchill Brothers the lead in the 27th minute, but just nine minutes later Hendra Adi Bayauw levelled the scores for Semen Padang FC and then on the stroke of half-time Muhammad Rizal put the visitors in front. After the break in the 57th minute young Bikramjit Singh struck the equaliser to ensure that the Red Machines keep a point.

"The next match we have to play well and win. the second half was bettter. (Lamine) Tamba has to combine well with the other defenders. Today's game was good and we should have won today's game," Mariano Dias added.

After the match Semen Padang coach Jafri Sastrak said, "I am happy with one point. About the injured goalkeeper - he is awake now, but cannot remember the match and one point is a good result."