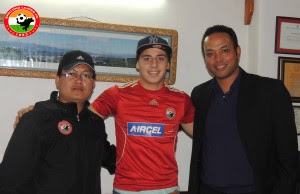 Edinho is the son of former Brazilian international footballer Edon do Amaral Neto and he only moved to Blackburn Rovers last year from Portuguese side Olhanense SC. He has been part of the Rovers Reserve side, but hopes to get more playing time with Lajong FC.

The signing of Edinho is the first ever loan move of a footballer from a big international club to an Indian side.

Over the next few days Edinho will train with his new team mates and he could play his first I-League match against Pune FC on March 24 with the match being aired live on Ten Action at 7pm.
Diposting oleh Unknown di 15.00