AFC Cup: Churchill Brothers in must win match against Singapore side 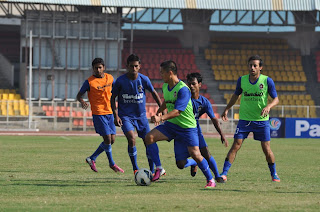 I-League leaders Churchill Brothers SC will face Singapore side Warrior FC (formerly Singapore Armed Forces) in their Group E Round 3 match of the AFC Cup at the Shri Shiv Chhatrapati Sports Complex in Pune tomorrow. After their opening round loss against Kitchee SC and the draw against Semen Padang, the Red Machines know that a win is necessary to keep their AFC Cup hopes alive.

At the pre-match press conference Churchill Brothers head coach Mariano Dias said, "We have injuries to deal with, Beto is surely out for three matches with a hamstring injury, also we are without Henri Antchouet, Bineesh Balan, Lenny Rodrigues, Steven Dias due to injuries. Lamine Tamba is serving a suspension after he picked up two yellow cards in the previous two matches."

"Every match is important for us, we cannot take any match lightly, the boys would go out their and give their best and I am hoping that we can collect all three points," Mariano added.

Wing-back Denzil Franco added, "The heat was unbearable, not easy to perform, this time its a much more difficult task with a young team because of the injuries, but we believe in each other and will give our best and lets hope for three points." 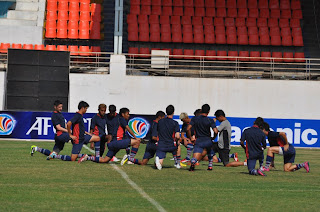 Warrior FC are in a somewhat similar situation as they lost both their matches in the AFC Cup this season against Semen Padang and Kitchee SC.

The Warrior FC coach V. Selvaraj said, "We have watched Churchill Brothers play against Kitchee, they are a very good team, we have to get our result and get three points. Sunil Chhetri is the one to look out for, he could be the main threat."

Warrior's captain Daniel Bennett added, "The two matches we played could have gone the other way, we let a lead slip in the match agains Kitchee SC, I believe there is not too much of a difference in quality between the teams in the league. We need a result and need to win, we have two teams that will be going all out for a victory."

"We have played in this tournament many times before, have made it past the group stages many times, we believe in this club and with our history we believe we can go through this year's group stage too."

"The boys are positive, we have our backs against the wall and will surely give our best to get a positive result in this match," Bennett ended.