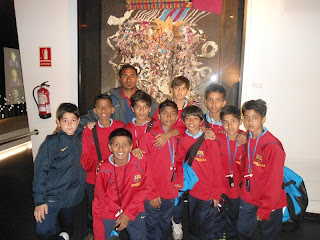 FCBEscola India team represented by nine footballers selected from across India created a flutter at the International Escola Tournament, Barcelona with their spectacular performance on the field.

The FCBEscola India team secured ninth position amongst 28 teams in the under-12 category of the tournament in which the Indian boys also topped their preliminary Group B. The teams in FCBEscola India's group consisted of FCBEscola 4; FCBEscola Kuwait; FCB ET Tenerife and FCBEscola Reus.

Based on stringent parameters of FCBEscola, four footballers from Goa, three from Delhi-NCR, one each from Raipur and Jaipur were selected to represent FCBEscola India. The team underwent training at the FCBEscola India facility in Gurgaon, played a total of seven matches on the format of 25 minutes with 6 players and one goalkeeper. Held at the Mini Estadi facilities next to Camp Nou, the International FCBEscola Tournament is an annual tourney played amongst all Escolas worldwide.

The youngsters played relentlessly with their peers from different countries, showcasing their skill in ball possession and short passes. Team FCBEscola India earned laurels from their counterparts and from FCBEscola for bonhomie, team behaviour and playing skills.