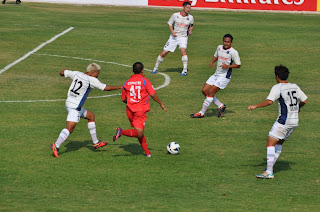 A depleted I-League side Churchill Brothers SC due to injuries and suspensions won 3-0 against Warriors FC from Singapore in their Round 3 match of the AFC Cup at the Shri Shiv Chhatrapati Sports Complex in Pune this afternoon. The Red Machines put up a clinical performance against Warriors FC, who were hampered by the hot Pune weather.

Churchill Brothers head coach Mariano Dias said, "We played very well even though we were missing quiet a few of our first team players. This team believes in itself and the players played for each other."

The Warrior FC coach V. Selvaraj said, "We are disappointed with the result, the Churchill Brothers midfield was brilliant. We were disappointing in the first half, however I was happy with our performance in the second half."

The Goans went ahead in the 37th minute through a brilliant Jaison Vales right-footed strike from 20 yards out that left the Warriors goalkeeper Hassan Bin Abdullah Sunny stranded. And Churchill Brothers then doubled their lead just before the lemon break, when Sunil Chhetri found Bikramjit Singh inside the box, who tapped it past the keeper.

The red Machines then finished the game off in the 83rd minute, when a long ball by Dharmaraj Ravanan was pounced upon by Belal Arezou who unselfishly played it to Sunil Chhetri, who rounded the goalkeeper and scored, earning a huge round of applause by the sizeable number of fans that had turned up to watch the intriguing tie.

"We have a good chance to make it past the group stage, we have lost one, drawn one and won one. Our next match is in Singapore on the 10th of April and it will be a crucial game that we have to win," Mariano Dias said.

"I still believe that we can qualify for the knockout stages, we got three more games to go and I have faith in my team," V. Selvaraj said.

With regards to the congestion due to playing the domestic league and the AFC Cup, we take all matches seriously, however the standard of the AFC Cup is better than the I League," Mariano Dias added.

With their first win of the campaign, Churchill Brothers are on 4 points from 3 matches and back in contention for the place in the pre-quarterfinals. The Red Machines play the return tie in Singapore against Warriors FC on April 10.