Sporting Clube coach Oscar Bruzon: My players deserve every bit of the credit! 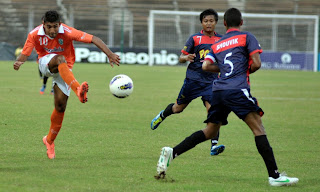 From the jaws of relegation to the top-six in the I-League. The journey has been nothing short of spectacular for Sporting Clube de Goa since Spanish Coach Óscar Bruzón Barreras took over the reins. Speaking to AIFF Media in a free-wheeling interview, the Spanish Coach describes the journey, the difficulties, the role of the players, his philosophy much and more.


The transformation has been evident in Sporting Clube de Goa since you took over as their Head Coach in December. How would you define it?

It has been all because of sheer hard work in practice sessions. All of that has reflected the team's remarkable comeback. We won five matches on the trot. We also beat the likes of Dempo and Churchill Brothers. We shouldn't forget that few months ago, we were fighting relegation. The credit goes to each and every player. It's because of their hard work that we are here today. They followed my instructions, gelled well and played as a unit. After all, it's all about the players.


The team was in tatters when you took up the reins. What different have you done to turn the tide in your favour?

I stress a lot on training sessions as I feel that is the most important part. My job is to assess each and every player and the team collectively and motivate them to see that they stay happy. The psychological part is very important. When I took over, I found drooping shoulders and a general lack of confidence.

We play a lot of small sided games that increase your actions per minute. I also make my players do match related drills more often. It is useless training for long hours doing mostly exercises. It should be equal in football. Players need to learn the art of decision making which stays the most important aspect of football.


Did you chalk any particular strategy?

It's simple - focus on training sessions and make sure that your players enjoy them. They feel the pulse and hence can translate that on the football pitch when it matters. You also need to make every player – irrespective of the fact that he is in the starting XI or not – feel important. Everyone must be involved in the sessions. That's my philosophy or strategy whatever.


How difficult has the journey been so far?

It was very difficult initially. I had trained with this side back in December 2011 so I somewhat knew the team. I mixed with the group and boosted them psychologically. You need to hold your heads high otherwise no plan will work. I had to start from scratch because as I said, the players were clearly not in the right shape. The rest is history.

It's not about two or three players but about the whole group of players. It is about the team as a whole. But yeah, both Juan and Angel are extremely talented. I would like to pick Juan for special praise. His footballing acumen is exceptional. Angel too is a good defender and his anticipation is commendable. He is a motivator on the pitch too. There is no hiding from the fact that these two have made a lot of difference.


You talk of the importance of training sessions a lot and small sided games. Raymond Verheijen's Course seem to have a strong impact on you.

Definitely! The Course helped a lot. First-hand experience from a man of Raymond's stature is superb. I picked up a lot of conditioning tools from him. The European model that he so clearly explained is remarkable.


Where do you aim to finish this season?

The aim is to go unbeaten for the rest of the matches. If we can do that it will be amazing. We have already achieved so much. From relegation prospects we are now in the top half of the table. We have beaten the Goan heavyweights. Now we intend to perform well against the Kolkata-based clubs. We have matches against Mohun Bagan and East Bengal coming up.